Tennis is a fun yet complex sport. It may look easy to some, but once you get hold of a racket and try to consistently return a ball across the net, you will find out it’s not so easy after all. How to tennis backhand will guide you to make your journey easy & fun.

As in many sports, fundamentals are essential in tennis. From knowing how to handle a tennis racket, proper footwork, and the types of shots to make. These are all necessary “ingredients” needed to excel.

The backhand, just like the forehand, is also an important skill to learn to be effective in playing tennis. To have a weak backhand may not be as critical to a recreational player compared to a professional. If you’re a professional tennis player and you have a very weak backhand, chances are you’re not going to be playing in a lot of championship games.

While there may be few exceptions to this, elite players almost always have a powerful backhand that could pull them out of the “danger zone” such as Stan Wawrinka, Roger Federer, Rafael Nadal, and many more.

So why is it important to learn how to accurately hit a tennis backhand, and what are the fundamentals of this particular stroke in tennis? 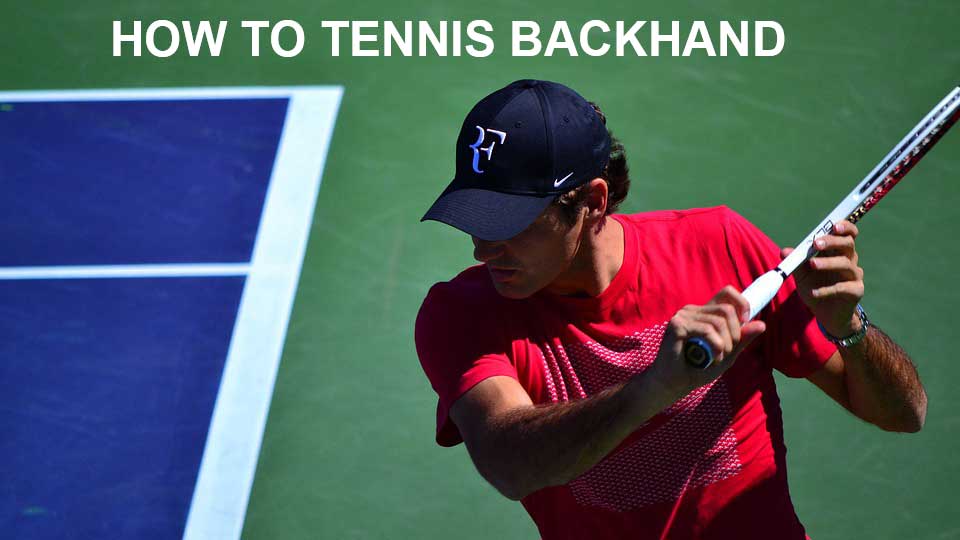 How to Tennis Backhand

While a forehand is a type of shot wherein you swing the racket across your body with your hand palm first, a backhand is the opposite. It’s done with the back of the hand with your palm towards you. Since the player’s dominant hand is not in the natural position as compared to a forehand, the backhand is considered to be less powerful, and more difficult for most players to master.

For an orthodox player (right-handed), a backhand is done beginning with the racquet on the left side of his body. As soon as the ball approaches, the racket travels to the right side across the body in an upward motion over the right shoulder.

While there is an ongoing debate as to which of the two is better, it’s hard to say that one is more superior to the other if we judge it on elite players’ performances. While just looking at the way Federer hits the backhand compared with Nadal’s shows how their techniques are different, it’s hard to say that one is better than the other. So it will boil down your preference in case you have started to play tennis. The best way is to try both and see which of the two suits your playing style better.

Still, learning how to properly hit a tennis backhand should prove valuable in your quest to be the best possible tennis player that you can be.

The single or one-handed backhand is a more complicated type compared to double-handed. The most well-known single-handed 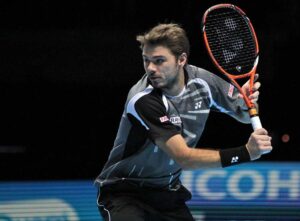 backhand player is Roger Federer. He held the No. 1 spot in tennis for 310 weeks, and most experts believe that his back-hand is the reason for that.

The main benefit of this type of backhand is the reach. It’s easier to approach the net and move with an attack using just one hand. This is because you can hit the ball which is further in front of you. Another advantage is that it doesn’t make a slice obvious, which keeps your opponent guessing your every move. The grip that most professional use in hitting a backhand for both single and double-handed in the Eastern and Semi-Western grip.

There are three important steps in hitting a single-handed backhand. These are the following:

If you watch videos of one-handed backhand tennis players such as Stan Wawrinka and Roger Federer, you will notice their preparation as soon as the ball approaches. When they see the ball coming to the back-end, they get sideways on with the right shoulder turning on the side of the approaching ball. The racket is then raised with the left hand holding the “throat” of the racket as a guide. Most beginners make the mistake of turning sideways only when they are already about the hit the ball. By this time, it’s already late, and there is not much power generated.

Once you’ve made a sideways turn, it’s important to have a good power position with your hands and the tennis racket. As your side is towards the approaching ball, your dominant hand should be gripping the racket head higher than your grip level. This is to give it more room to generate more power when hitting the ball. Your left hand should be then holding the throat of the racket, while your left elbow is slightly bent coming up to about shoulder height. The common mistake made by amateur players is that the racket is held almost the same height as the grip. This doesn’t give the space needed for the racket to hit the ball with more power. A more closed stance is required to generate more power since backhand shots typically have less power compared to a forehand. This ensures your body to have a greater rotation, which results in more power since it involves your core muscles, as well as the power generated through your right leg. You will notice this with players whose weight is transferred from the back to the front. Observe how the elite players’ back foot perches on the toe which indicates a weight shift.

The last step but also very important is to balance your body right after hitting the ball. Your left hand (if you’re a right-hand player) should counter the swing by your right hand to balance your body into position. So if you observe players like Roger Federer execute the one-handed backhand, you will notice that his left hand is down and stretched back to counterbalance his right hand. You will also see that his chest is stretched out, and the right hand stretched with the racket pointing to the sky. The common mistake by beginners or even club players is that they don’t use their non-dominant arm to counterbalance their tennis arm, which renders the shot less effective.

While the single-hand backhand’s advantage is it’s further reaching, the two-handed backhand is more fluid and dense. The stance and 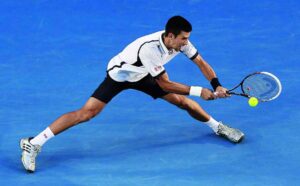 the shoulder turn is the same as that with the single-handed backhand. The main difference is the position of both hands, which are holding the racket, which should be in an upward position pointing to the sky.

The three most popular players who use this type of backhand are Rafael Nadal, Novak Djokovic, and Andy Murray, who all possess explosive backhands. In hitting the backhand the ideal racket position is at least 7-8 inches under the ball. The racket head must be placed lower than your dominant hand, which allows you to be below the ball.

The racket must move from the 6:00 position (in reference to a clock), towards the 12:00 o’clock position which creates a topspin. The forward motion of the racket generates the needed power to hit the ball with great force.

There are many favored grips for both the single and double-handed backhand. For the single-handed, Roger Federer uses the Modified Eastern grip while Rafael Nadal uses the Semi-Western Grip

While there are slight variations on the exact position of the hand for the Eastern backhand grip, the index finger knuckle on bevel 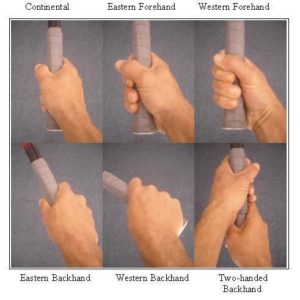 number 1 is the recognized position. All the knuckles line up in a straight position on the grip.

So when you hold your tennis racket in the Eastern backhand grip, it would look like you are making a fist towards the ball. Or another similar description is the way you grip a handlebar of a bike. However, there is a lot of wiggle room with this grip and some prefer the knuckle of the index finger on bevel number 2. Others prefer to slightly fan the hand in such a way that it doesn’t’ look dead straight across.

As long as the knuckle is either in bevel 1 or 2 positions, this would be considered as an Eastern backhand grip. If you are a beginner, you should try which one suits your style of play as there is no one-size-fits-all when it comes to most of the handgrips in tennis.

The Semi-Western grip which Rafael Nadal uses is made when the base knuckle of the index finger is placed on bevel number 8. This grip

allows for the most topspin, that’s why Nadal is notoriously famous for using this type of grip – with great results.

So have you got a grip on how to properly hit a tennis backhand? Great!

The backhand is not an easy shot to master but once a player develops a proper backhand stroke, it is a very effective and formidable tool to summon in every game. You now know that the backhand can be performed with one or two hands. The one-hand backhand was the more preferred by tennis players for most of the 2oth century. However, statistics show that there are less professional players that use the single-handed backhand stroke as compared to 10-15 years ago. But don’t let this fact discourage you. At the end of the day, you will be the best person to know which is the right style that suits you. So it’s time to hit the tennis club and apply what you’ve learned on how to properly hit a tennis backhand.